The following clean up was not TU sponsored event, but we appreciate the efforts of anyone willing to improve our watershed.
On November 19th, a group of about 12 people gathered to try and clean up an area of the Monocacy creek that runs through Archibald Johnson Conservation Area.  The focus was on an area downstream, (west) of Christian Springs Rd.  (Click read more link below map for the full article). 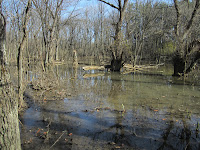 The goal was to remove as much trash as possible, and also restore flow to the channel by clearing some major log jams.  The log jams were causing the creek to completely spill its banks and flood dry land.  A major part of those goals were achieved, with multiple bags of trash collected, and a major portion of three log jams cleared.  Once the land area has dried, it is hoped that one of the local municipalities can move heavy equipment into the area and clear the remaining logs.  At least one of the logs is 30" in diameter.
Below are some before/after pictures of work on one of the log jams. 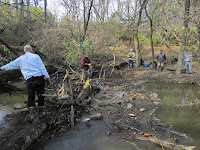 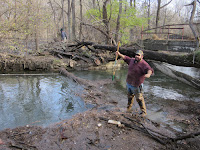 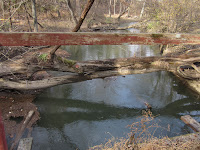 Two other log jams were opened, but not totally cleared due to the size of the logs and the depth/ swiftness of the water.  This was a major undertaking, but the results were noticed almost immediately.  The creek started flowing with greater volume in the original channel, and the flood water began to subside in the areas outside of the creek.  Hopefully the renewed flow will help disperse the massive amount of sedimentation and the banks can begin to re-stabilize were the were being eroded.