The TU National Meeting was held this past Thursday- Sunday in downtown Scranton, PA.  On Thursday, chapter member Todd Griffith joined a conservation tour which consisted of several sites that highlighted local projects.  The fist stop was the Old Forge Bore Hole, which is a 44inch several hundred foot deep hole drilled by the Army Core of Engineers in 1961.  The hole is used to relieve groundwater pressure that was caused by the flooding of coal tunnels by the Susquehanna River.  The Bore Hole drains about 60 MILLION gallons of mine drainage PER DAY.  For the past 50 years. 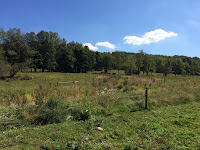 The second stop was a project to protect a small tributary that passed through a working cattle farm. 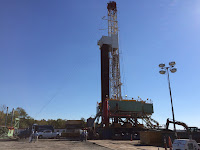 Last but not least was a visit to some gas drilling operations, with representatives explaining the process.  TU's own Katy Dunlap was on hand to ask specific questions.

A thanks to Todd Griffith for joining the tour ans taking the pictures.

Newer Post Older Post Home
The Monocacy Chapter of Trout Unlimited #491, meets at 7pm, the fourth Tuesday of the month September-May. We meet in the Daughters of the American Revolution House, Eighth Avenue, Bethlehem PA unless otherwise noted.