In the spirit of Thanksgiving, this months program focused on the use of turkey feathers in fly patterns.  Several members brought some tying supplies and a pattern to share, and all three took turns demonstrating the tying steps to make those patterns.
First up was Erik Broesicke, showing a sulpher pattern that uses a dyed orange turkey biot for the body and an upright wing made of the feather material of your choice.  This is tied compara-dun style with no hackle. 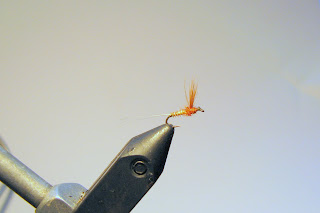 This is a fly best used in slack water because there is no supporting hackle to help it float in the rough water.  If you are getting refusals, try pulling it under to simulate an emerger.

Next Jeff Shafer showed off a pattern he came up with just for this meeting, which he dubbed the turkey tail nymph. 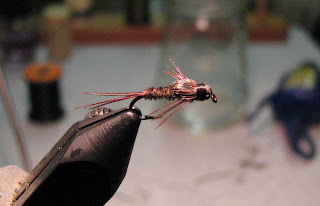 Jeff's nymph is one of those that imitates many dark mayfly nymphs and will work well on our local streams. 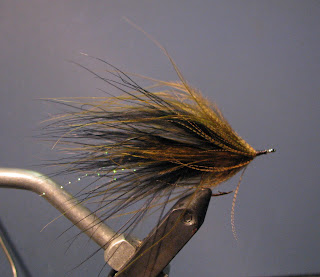 Thread: Whatever you grab
Hook:  Yes
Tail: Crystal flash, what ever color you like
Body: Marabou Palmered forward to the hook eye.  Start by tying a marabou feather in by the tip and wrapping it forward, stroking the fibers back as you go.  You can mix feathers to create different color patterns or just use one color.
A nice finishing touch is to Palmer a lemon wood duck feather at the head of the fly, or even some crystal flash distributed around the hook.

This pattern looks like a bass/ warm water fly, but it works on trout too.  Big ones.  Gary like the versatility of being able to fish it like a streamer, or dead drift/ wet fly swing the pattern.  The marabou makes the fly come alive in the water.

A big thanks, to Jeff and Gary for volunteering to show off their patterns and some insight into the philosophy behind some of the techniques.